The Saint John’s Bible is the first hand written, illuminated bible commissioned by a Benedictine Monastery since the invention of the printing press over 500 years ago. It was commissioned by Saint John’s Abbey and University in Collegeville, Minnesota, and executed by Donald Jackson, Senior Scribe to Her Majesty Queen Elizabeth’s Crown Office. Mr. Jackson directed a collaborative team of scribes and artists who worked from a scriptorium in Wales. A committee of theologians, biblical scholars, and art historians, advised Donald Jackson and his team from the campus of Saint John’s.

The Saint John’s Bible took nearly 15 years to complete. Every letter of the bible was handwritten. It was made using traditional materials such as vellum (callfskin), ancient inks, and gold and silver leaf. The script was written with quill pens fashioned from goose, turkey, and swan feathers. Modern computer technology was used for page layout. The Bible consists of seven volumes of approximately 1,150 pages, containing all 73 books.  There are 160 illuminations. Its monumental size (24 ½ x 15 7/8) mimics the size of handwritten bibles in the middle ages. The New Revised Standard Version (NRSV) translation was used.

In 2011, a generous donor gifted Saint Peter’s University with all seven volumes of The Saint John’s Bible Heritage Edition. The Heritage Edition is a full-size, museum quality, fine art reproduction. of the Bible. We proudly display each book on a rotating basis in the Reference Room of the Theresa and Edward O’Toole Library. The original copy of the Bible is in the Hill Museum and Manuscript Library on the campus of Saint John’s Abbey and University. 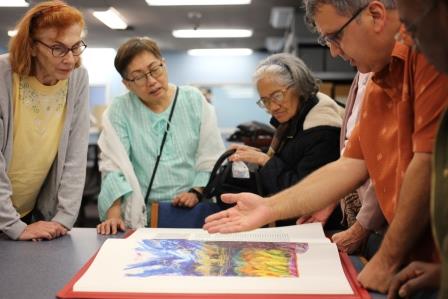 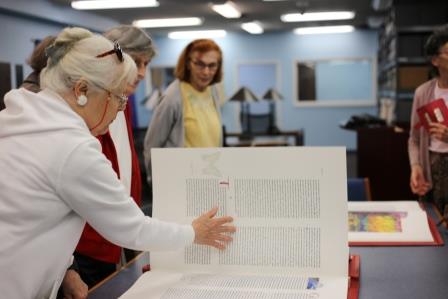 A parishioner from Saint Aloysius Catholic Church turns the page on the Saint John's Bible.  June 2018 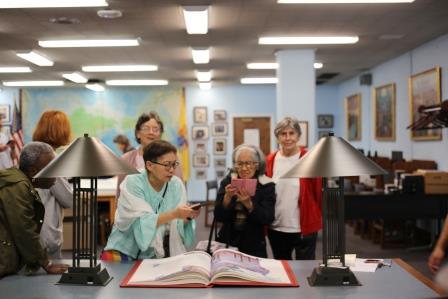 The Saint John's Bible may be viewed on an appointment basis in the Guarini Center for Community Memory, located on the basement level of the O'Toole Library.  Please contact librarian, Mark Graceffo to make arrangements. 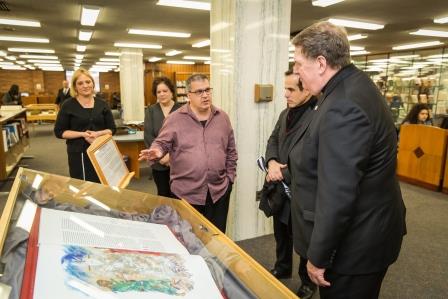